Self Portrait of the Artist as a Beardo

At some point I came across one of those Rugged Man Stuff essays on the internet about the overall viability of straight razor shaving. The beard thing started to be an identifying trait for me, but I kept thinking about getting myself a proper straight razor, despite the overall fear-factor of putting an open blade on my face.

A good razor costs money though, and the article I’d read only talked about new-production razors, which run between $80-120. That’s a pretty large barrier for mild-curiosity to overcome. 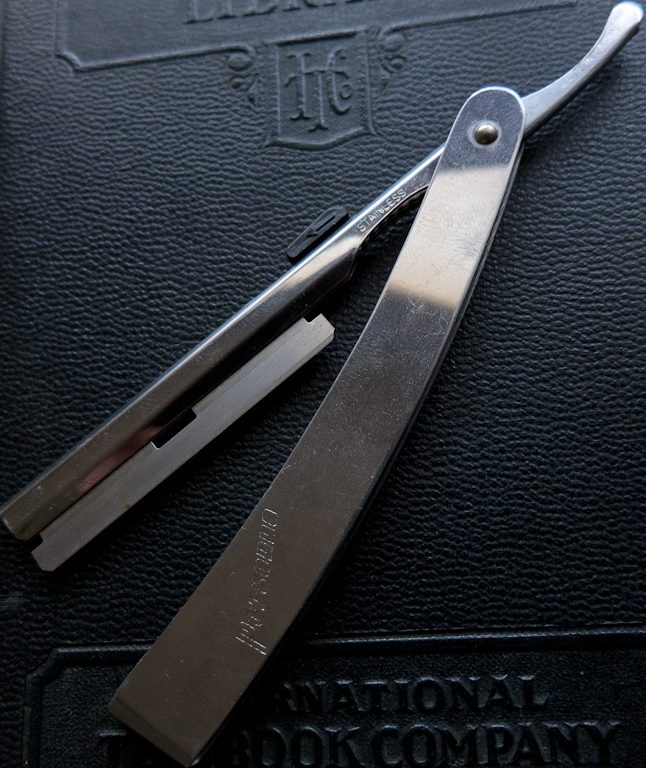 The beard was really annoying me. So I started reading up and found that razor enthusiasts seemed to think that the replaceable blade razors you can get at beauty supply stores are a passable learning tool.

I started modest and used the razor just to shave the edges of the beard. It took me six months to work up the gumption and practice with small patches to take the whole beard off. The hair shaper tool works okay, and while I didn’t ever cut myself with it, I also didn’t use shaving cream or even wet my face. It worked though, and the beard went away.

Considering that a success, and having done a lot more reading, I headed off to an antique store to find a real vintage straight razor. 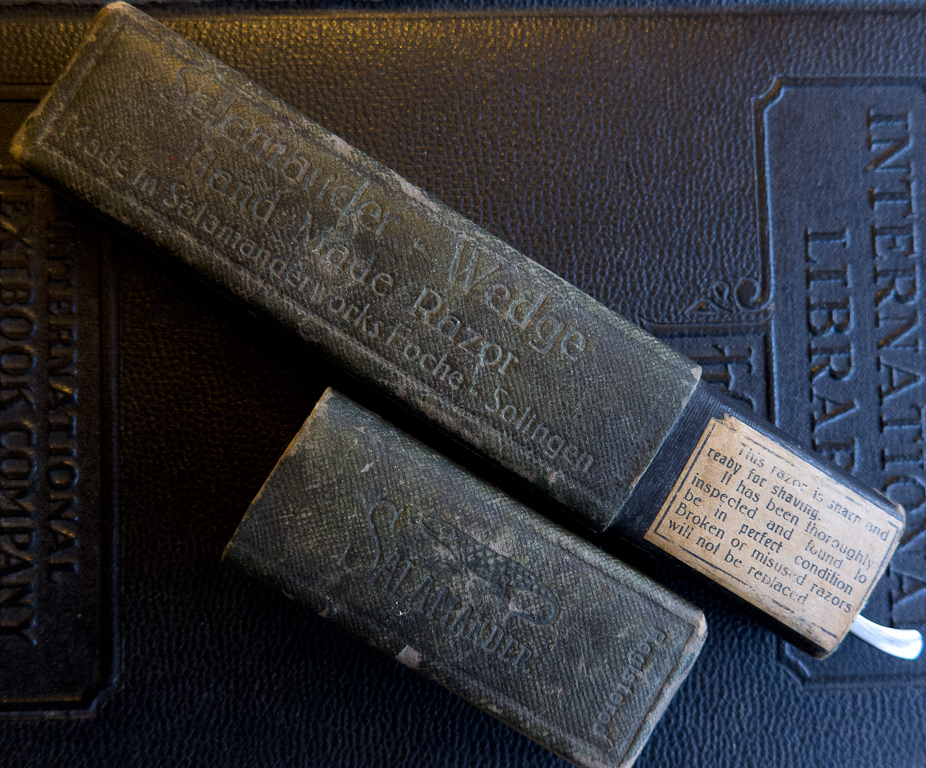 The only one they had set me back $20. It was rusted and small, but it’d been made in Solingen, Germany so I knew it was probably at least good.

The rust meant I would have to disassemble it, and taking the pins out meant learning a lot about restoration. What started as $20 quickly grew considerably. I also needed a strop and a hone.

I spent a lot of time watching and rewatching Brad Maggard’s restoration videos.

I couldn’t even find the right kind of washers to put it back together, so I bought a cheapy drill-press conversion for my Dremel and set about drilling out holes in washers that were too small. This is not something I will ever do again and I do not recommend it to anyone.

From there I polished the blade and repinned it. Badly. I wrecked the lettering on the scales. I mangled the pins. I did a very beginner-like job of polishing the metal. But I had a razor at the end of it.

This is not a good pinning job.

By that time I’d gotten several others and I’d even managed to mostly hone one of them, but what I found most interesting of all was learning about the companies that made them.

At the time I found that the razor was made between 1920 and 1926 at the Salamander Works in Foche-Solingen, Germany. The website that had information included a drawing of the factory and an old woodblock print of the mythical Salamander which gave the company its name (much like Jim Hrisoulas’ sword-making business). 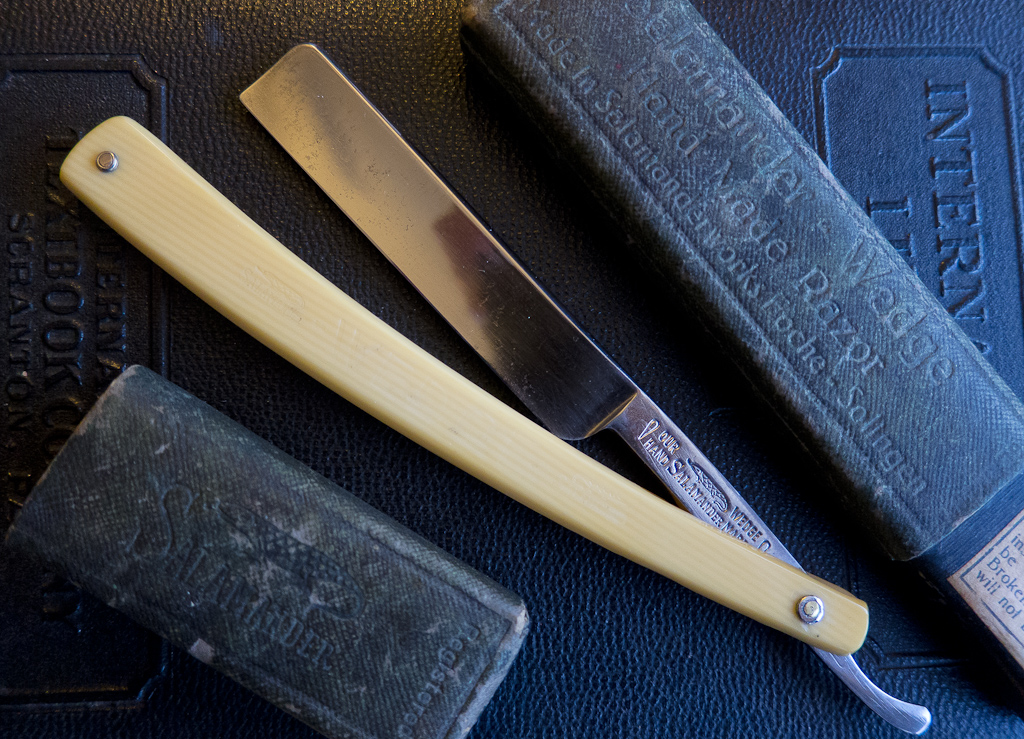 However the drawing of the factory used on that website (which I can no longer find) was actually a drawing of the Salamander Works brick factory in New York City before 1850.

1920 to 1926 is a pretty narrow range of production for a razor. Some models of Wade & Butcher or Wostenholm spanned 50 years, leaving interested parties to pursue ever-smaller minutia in order to figure out when they were made. Now, thanks Alex Ts., I know that W. Triesch owned the Salamander trademark that these razors were made under. My ability to read German is very poor, but it appears that the Triesch family of Solingen were metal-workers going back to at least the 1890’s. Die Werkzeugmaschine, Volume 4, published in 1899, lists under New Firms and Changed Names:

I can’t find any other references to Ernst Triesch or W. Triesch. The Salamander Works of Foche-Solingen had to have produced a goodly number of razors though because they turn up regularly. I’ve seen at least five different models.

By the time these razors were made the wedge grind was very much out of fashion having been replaced with fully hollow-ground. The difference between grinds is outside the scope of this entry, but simply put hollow ground razors are easier to hone and lighter.

But I loved my little Salamander razor, and I felt bad about the lousy job I’d done restoring it, so at the earliest opportunity I got another one. 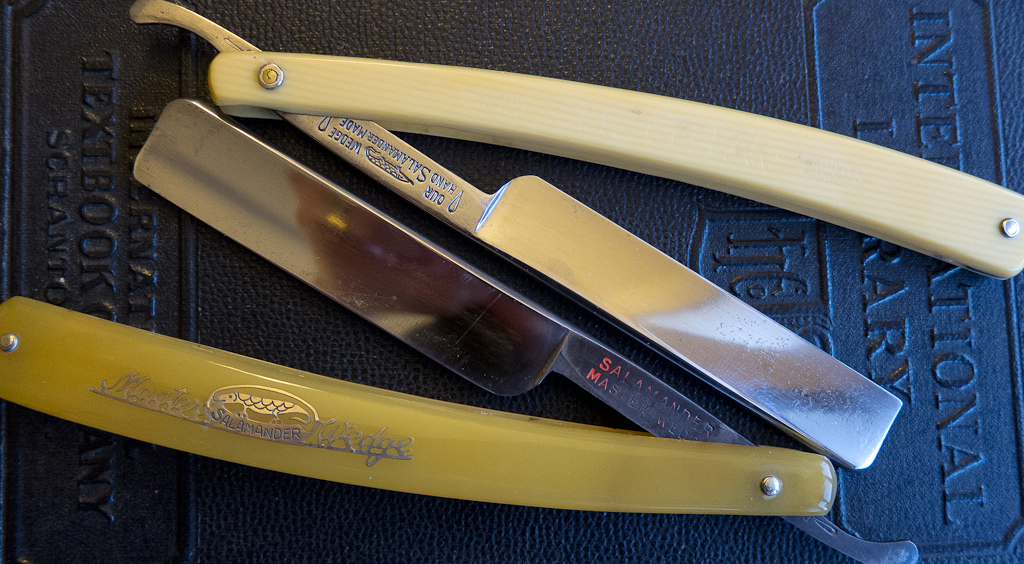 They both provide superb shaves, but I think that first one is just a little bit better.