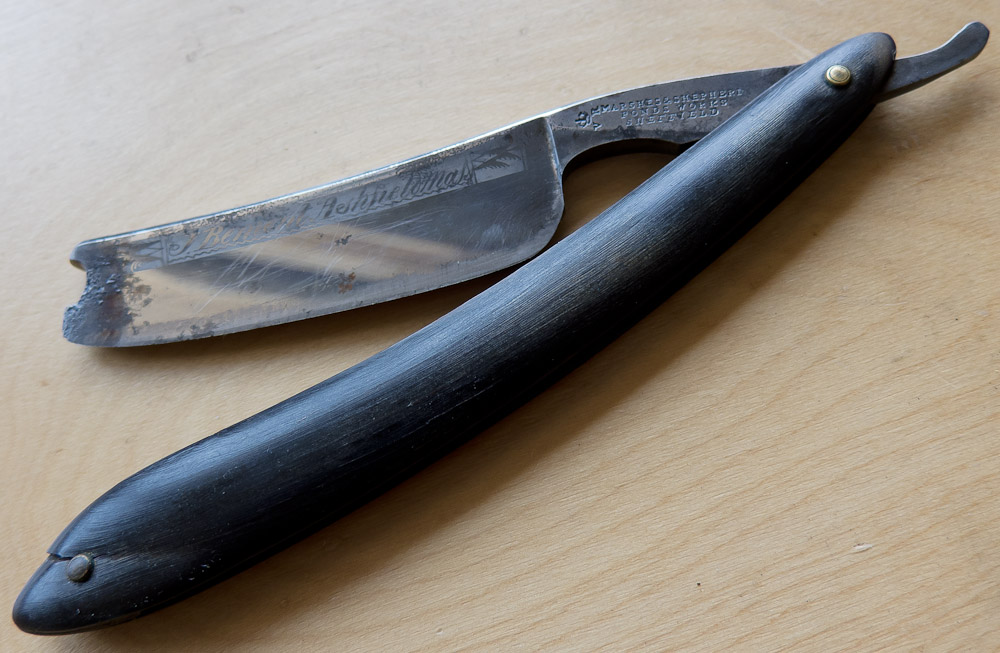 I buy most of my razors from eBay and the metrics I use to determine whether I’ll bid on any given razor are really too complex to describe. There were a few things about this razor that caught my attention. First and foremost it’s a Marshes & Shepherd with the VR stamp and I didn’t have any of those — in fact, at the time I had no razors with the VR stamp at all despite having many Victorian-era razors. Also, the tapering blade is a style I’m very fond of (though they can be a bit of a pain to hone).

Marshes & Shepherd have a long trail of names behind them — James Marsh & Company, Marsh & Shepherd, John, William & Thomas Marsh. The lineage of cutlers in the Marsh family was long in the 1730’s when they married into the Shepherd family. The Shepherd family also had a long history in the business. By 1837 they’re listed as “Merchts. steel converters, and table, butcher, and shoe knife, file, and saw manfrs“.

This razor was made at the Pond Works (as it says on the tang), situated on Forge Lane in Sheffield.  It’s 7/8ths of an inch at the heel, horn scale, hollow point, quill-backed and crocus finished.

However, none of that is what makes this razor so interesting to me.

It’s the etching on the blade that does that. It reads “J. Bement Ashfield Maſs“.

Maſs, in this case, means Mass as in Massachusetts, the ſ is actually a long s, an archaic type convention no longer in much use by 1800, but still used by some old-timers. That’s a strong indicator that whoever etched the blade was educated before 1800. You might also notice that the last part of the lettering overlaps the border. I cannot think of a clearer example of the importance of being careful with  your work.

Interestingly I have another razor, a Greaves & Sons, same style of blade, almost the same dimensions, and it too had an etching on the blade in the same hand. It read “An Excellent Razor”. I’ve seen others as well.

But who was J. Bement of Ashfield, Massachusetts?

First of all, Bement is simply a variant spelling of Beaumont. However there were plenty of Bements in Ashfield around the time of this razor, so I don’t need to dig into alternate spellings.

Joseph and John can both be ruled out, as they died shortly after 1800, and I can say with certainty that this razor was made between 1837 and 1842. That leaves Jared and Jasper.

Dr. Jared Bement was born October 9th, 1796 in Ashfield. He had a successful practice and three children by two wives and then a third wife. He died October 11th, 1839 at his home in West Springfield widowing his wife of six months. Jared and his father Reuben were both staunch members of the Ashfield Temperance society.

This, likely, put them in direct opposition to Jasper Bement, one of the wealthiest men in Ashfield. Jasper had made his fortune selling alcohol under the guise of medicine. He ran a major local tavern that served double-duty as watering hole and political rallying spot. Jasper was a powerful man. He’s my main candidate for the J.Bement of the razor and first cousin to Jared.

JASPER BEMENT was a staunch abolitionist, and helped many slaves on to Canada in the old days, sometimes keeping them for several nights, until he could conceal them in the bottom of his sleigh or wagon, taking them at night to the next station or friend’s post. He was a wholesale and retail merchant, fitting out pedlars’ teams, which travelled over the country at the time, with dry goods and groceries; and was also a manufacturer of essences of all kinds. He filled acceptably various offices, within the gift of the town, was justice of the peace for many years, and representative to the General Court of Assembly of Massachusetts in 1845. After serving for some years as a deacon in the Congregational Church he became a Methodist and contributed substantially to the church of his adoption. After his death his beautiful homestead and estate were sold, in 1865, to Charles Eliot Norton, of Cambridge, Massachusetts, whose daughter still retained the place in 1913.
(Source: Chronicles of the Bement Family in America; 1928, p. 191)

I can only guess whether the razor was made for Jasper Bement’s use, or for him to sell. I know that wealthy men can and did purchase razors with their names etched onto them. The same was done for shops though, and indeed sometimes the makers stamps were customized. The only evidence I have for this particular razor is that it has a twin.

If you follow that link you might notice that the other J. Bement razor, exactly the same make and model, is not quite so cramped in its etching and it does not use a long s. So until I find further evidence, my best guess is that these razors were customized for sale by Jasper Bement in his store.