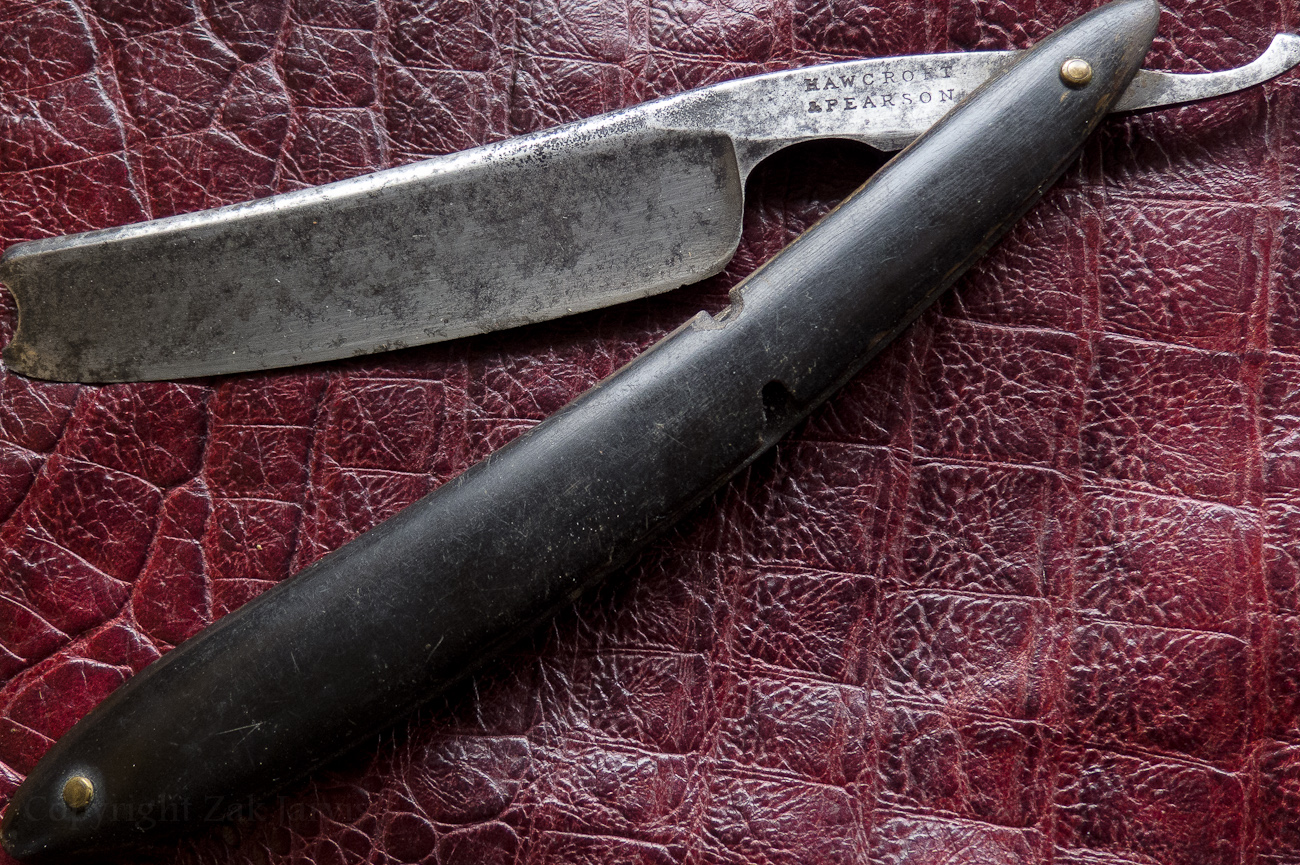 Samuel Pearson, born about 18061, is listed as Razorsmith as far back as 1827 on the baptism records of his children2. By 1834, when the firm of Hawcroft & Pearson was first listed3, he and his wife Ann became the parents of their fourth child, also named Samuel. The first daughter’s name was Ann, too.  This phenomenon is the bane of historians.

The son of Isaac Hawcroft and Sarah Revitt, William Hawcroft was born around 1801 in Bradfield, effectively a suburb in the northwest of Sheffield. Not to be confused with the Bradfield near London, which now also incorporates the hamlet of Tutts Clump.4

His early career is murky at best, but the Cutler’s Company of Hallmshire records an Isaac Hawcroft, grinder whose son William was apprenticed to William Revitt, that would most likely be Hawcroft’s maternal grandfather, and a major cutler. Revitt’s family went back a ways into the 1700’s. He owned the VIRGIL mark and one of his cousins owned HOMER, clearly fans of the classics. I’ll have more to say about Revitt in another post. If that’s the same William Hawcroft (and it seems fairly likely), his apprenticeship was complicated.

He began the apprenticeship in 1811 and was freed5 in… 1848? So maybe he had better things to do, like be a professional cutler. In any event, the Cutler’s Company lost its monopoly control of the industry in 1814 and anyone was allowed to strike a mark, not only freemen.

This is a useful place to explain a few things about the apprenticeship system in Sheffield. From very early on, the whole system was rigidly controlled (in theory) by the Cutler’s Company. There were regulations on how old apprentices must be when they started, how long their apprenticeship lasted, what they could do as apprentices and also how many apprentices a master could have. Until the late 1700’s a master could have one, single apprentice. This was often overlooked or fudged, and sometimes the children of the master were counted and sometimes they weren’t. But apprentices weren’t allowed to marry or have children. They weren’t allowed to strike their own marks. That sort of thing. In short, there were a lot of rules.

William Hawcroft and his wife (another) Ann had produced 5 children by the time of the 1841 census. Since he hadn’t technically completed his apprenticeship and wouldn’t for another seven years (the duration of a normal apprenticeship for a razorsmith!) it’s safe to say that William Hawcroft was not abiding particularly well by the ancient code of the Cutler’s Company.

This razor was most likely made around 1840, when the tapering blade was briefly popular. By 1841 Hawcroft was producing goods under his own name and by 1844 the partnership with Samuel Pearson was rolled up, around the same time  his sons got in on the act. 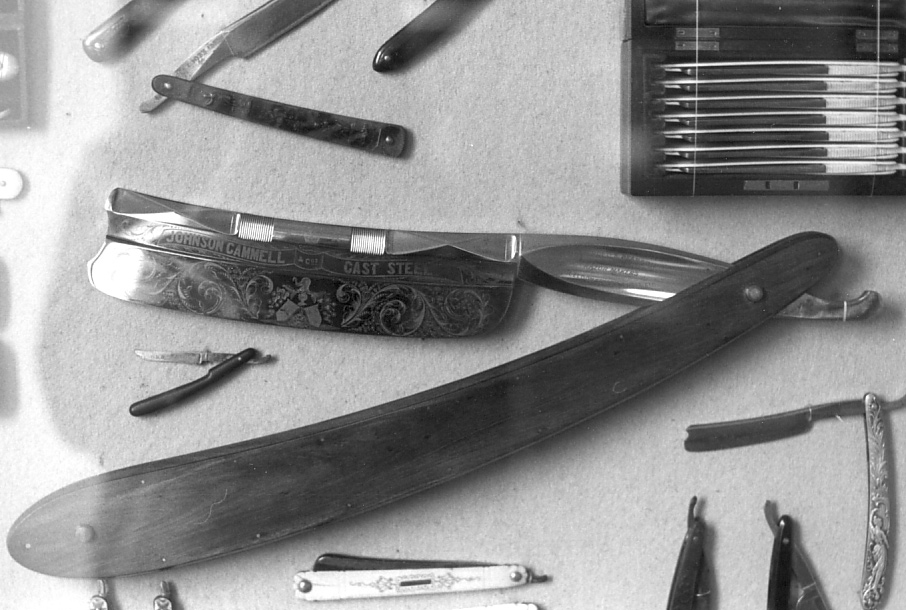 This enormous display razor is in the collection of the Weston Park museum of Sheffield. It was made by Hawcroft & Pearson for the Johnson Cammell crucible steel company. Photograph kindly provided by Geoffrey Tweedale.

Samuel Pearson continued producing razors from the workshop he’d occupied with William Hawcroft, and his business is still listed in 1926 as S. PEARSON & CO, LTD7.

William Hawcroft founded a new business with his sons, received several prestigious appointments and won awards for his cutlery. While Hawcroft’s business certainly fared well after the end of the partnership, his home life was not so fortunate.

In 1867 his wife died. She was 66 years old. The following year, the damndest thing happened8.

William Hawcroft was killed by a bull. Perhaps his umbrella9 startled them, but two bullocks being taken to the slaughterhouse knocked him down and one of them gored him in the head. He died two days later. 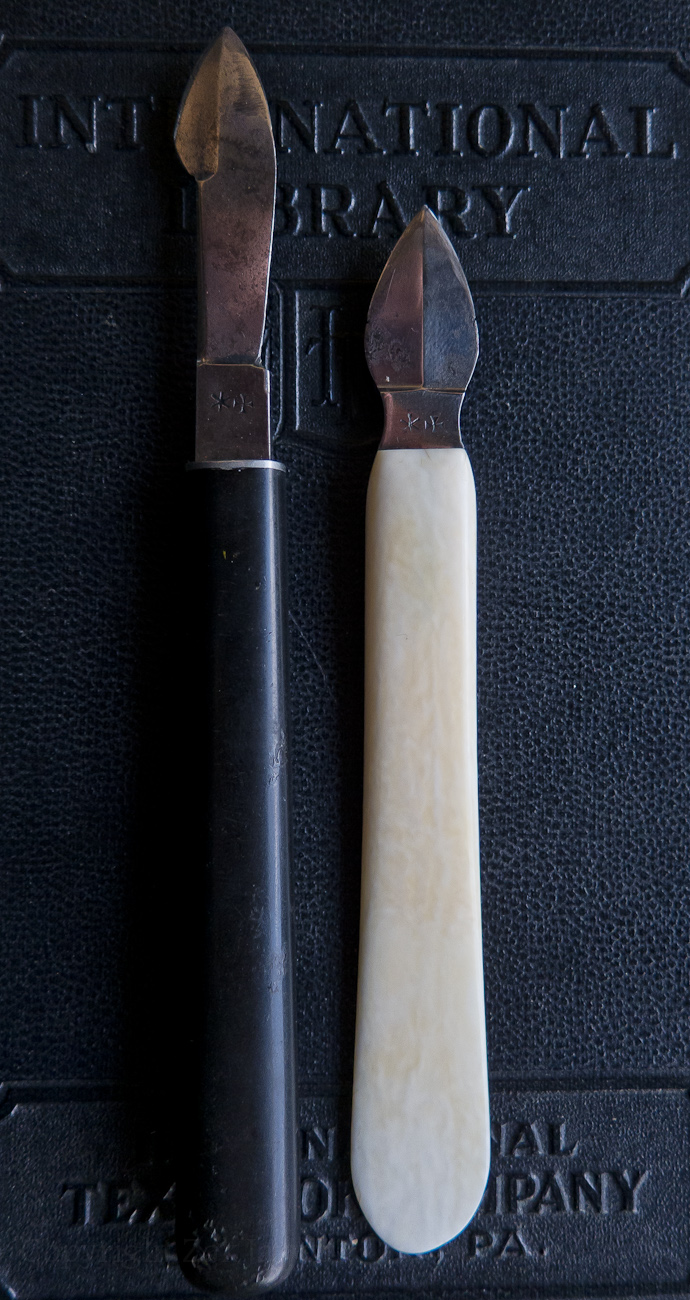 A pair of Joseph Rodgers steel erasers. The one on the left is a long-blade, hafted in gutta percha and the one on the right is a short blade in ivory. They’re used to scrape ink off a page.

William Hawcroft & Sons’ standard “Renown” razors are famed throughout the world as an article of pre-eminent excellence, being manufactured from the finest steel ever produced, and tempered by a secret process, imparting to the steel that degree of hardness, density and tenacity requisite to retain a perfect, fine and durable edge. Messrs. Hawcroft & Sons have been awarded the first prize medals of London and Paris, for excellence of quality of the “Renown” razors. Their steel erasers are also unexcelled.

Hawcroft and his sons had also exhibited their razors in 1851 at the Great Exhibition in London where William and his sons presented another large display razor. That one was etched with images of Peace and Plenty. They held on to that prosperity for a while. His son, William J. Hawcroft, was still listed as a razor manufacturer in the 1901 census.

This entry has been updated to include information about William Hawcroft’s parents and grandfather. Thank you, Neil Miller.