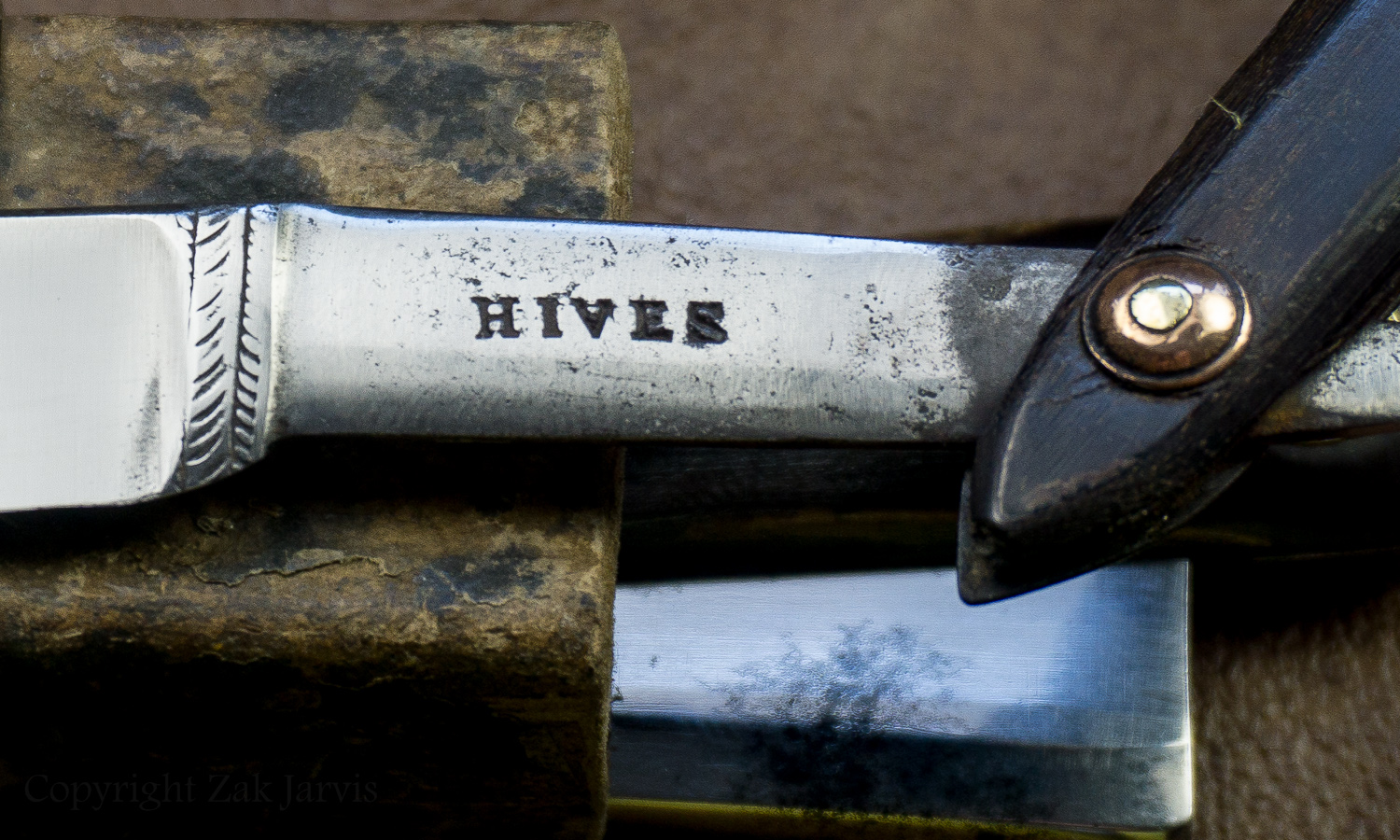 Old Sheffield produced an incredible number of cutlery firms. Some of them left behind clear records, like Joseph Rodgers or Marshes & Shepherd, but there were a great many smaller companies who are known only by their work or a single directory listing. Others were very important in their day but have long since been forgotten.

This article will be mostly about the former, where the available information is sparse at best.

We’ll begin with the razor in the picture above. 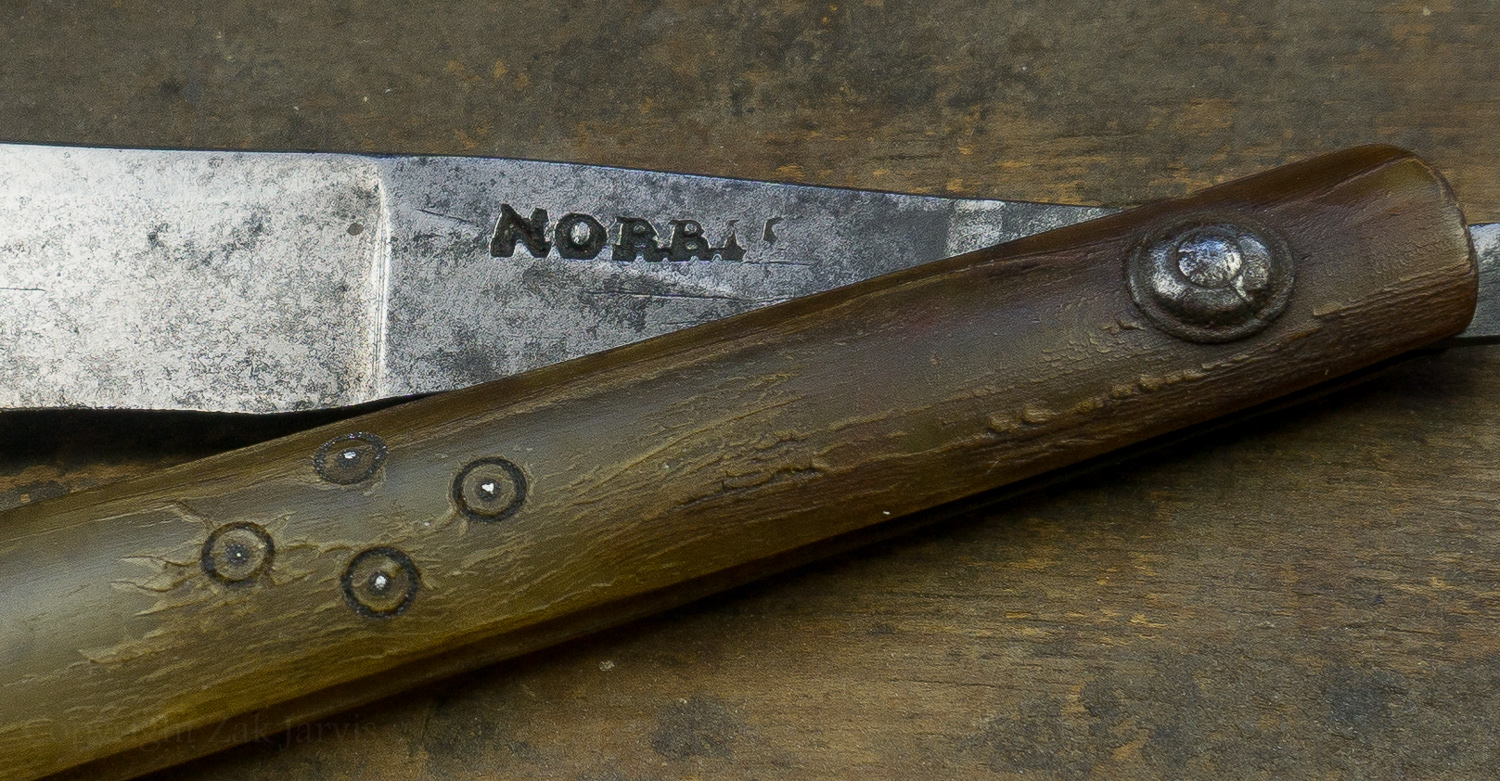 This razor was made between 1793 and 1808 ((based on the dates of the dissolution of Fox, Norris & Co and the great family misfortune)) by Samuel Norris. The Norris family is one of the better documented of those I’ll be writing about here. I’ll simply quote Leader ((Reminiscences of Old Sheffield: Its Streets and Its People:, R.E. Leader. It is somewhere between difficult and impossible to write in any depth about Old Sheffield without spending a little time between Leader’s pages.)).

Samuel Norris had six sons and four daughters. All died in infancy with the exception of three — Catherine, born 1770, died 1850, who married Rickards Ince ((a brief bio can be found here.)), a solicitor at Wirksworth ((A book on the region can be viewed here.)), and was the mother of the late Mr T. N. Ince, of Wakefield; John, born 1780, died 1825, who married the daughter of the Rev. James Dixon ((Read about Dixon here)), vicar of Ecclesfield, and lived at Firs hill and the Elms ((Just a bit south modern day Sheffield University)); and Thomas, born 1782, died 1816. The family history is a sad one. The firm did business in Germany, and the son Thomas had gone to Leipsic ((an archaic spelling of Leipzig)) with an unusually large stock of goods, when the French invading army came and the city was fired. Abandoning everything but the clothes he wore, he escaped through the instrumentality of an old woman, who concealed him. This was about the year 1808, and the misfortune was the first of a series that ruined the firm. The father, Samuel Norris, died in the Shrewsbury Hospital ((Something like an alms house, it was a charitable institution that closed in 1975, and not to be confused with the modern Shrewsbury Hospital)), July 16th, 1817. John lived in honourable poverty at Hillfoot; Thomas entered the Church, was ordained Deacon in 1809, and obtained a curacy in Essex. He was afterwards appointed Chaplain to the Forces, but owing to an accident on the voyage out to his station he was invalided home, and died at Chelsea, October 6, 1816. The Norris trade mark — a star (*) over a capital P, was, after the misfortunes of the Norrises, appropriated by one Harder, a German whom Thomas Norris had brought to England as a clerk, and who traded as Harder, Taylor & Co…

The Norris family had been closely allied with one of the two branches of the Fox family, and doing business as Fox & Norris, which brought them sufficient success that in 1777 Samuel Norris was appointed Master Cutler. But John Fox died in 1793 and the Norris clan went their own, sad way ((all dates come from Leader)). 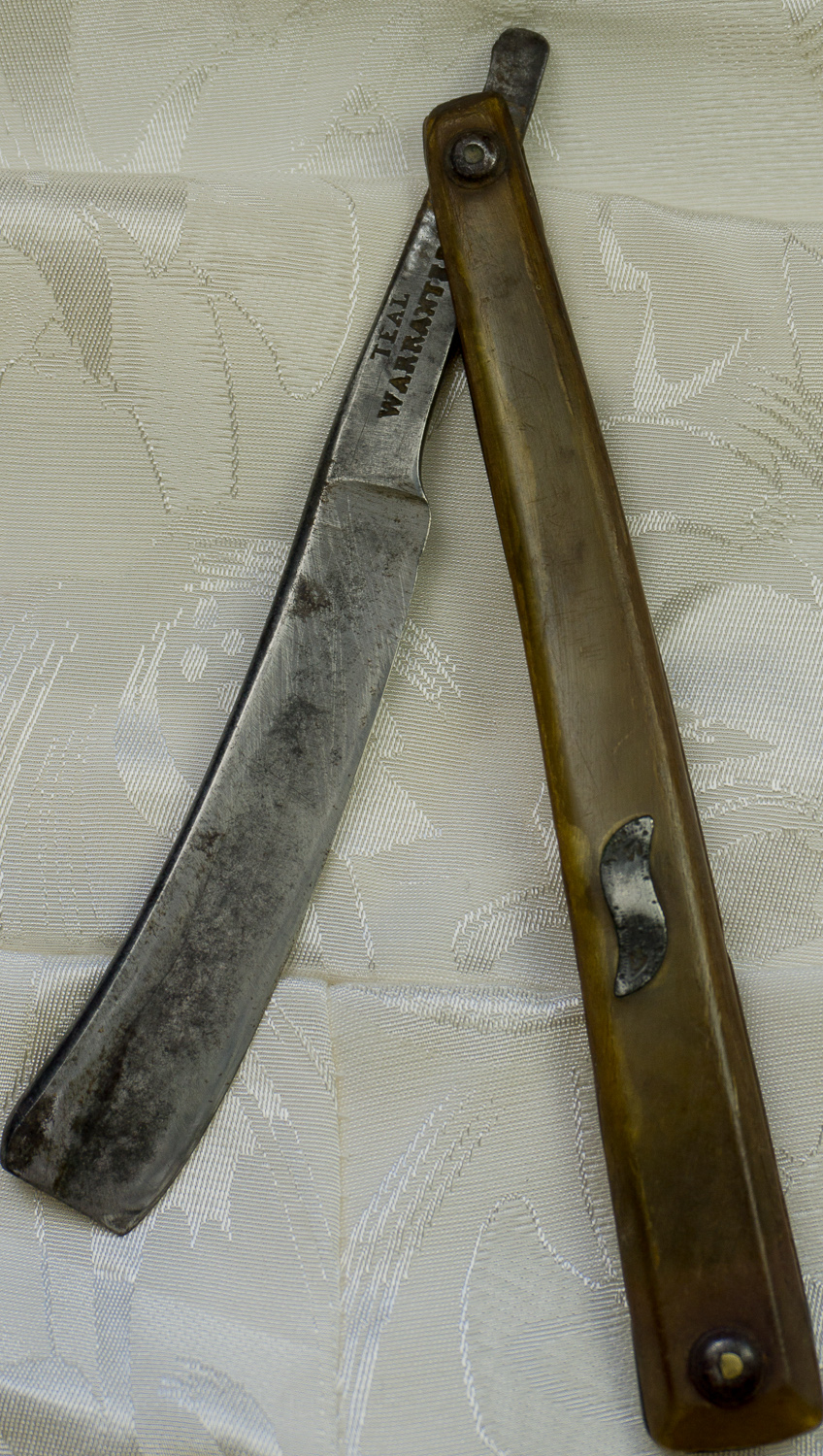 William Teal, son of Hugh (from Leeds), born January 3rd 1730, was apprenticed to Joseph then Edward Shepherd, cutlers, and freed in 1751. His single directory listing is from the 1787 Gales & Martin under “Table Knives, in general”. His mark was ‘Teal’ and he worked from Shudehill.

This razor makes it a pretty safe assumption that he made more than just table knives. The design elements of the blade strongly suggest it was made around 1800, so he may have branched out slightly after that first listing.

There are numerous strange gaps of time in that record. It was unusual then for anyone to still be an apprentice when they were twenty years old, as he was. Presumably, between his freedom and his first directory listing, he worked for others.

His family life is equally opaque. The only records I can find indicate that his wife’s name was Mary and he had a single daughter, Selina, who married John Lonsdale in 1802 (when her father was still listed as living).

Beyond that, I can find nothing. 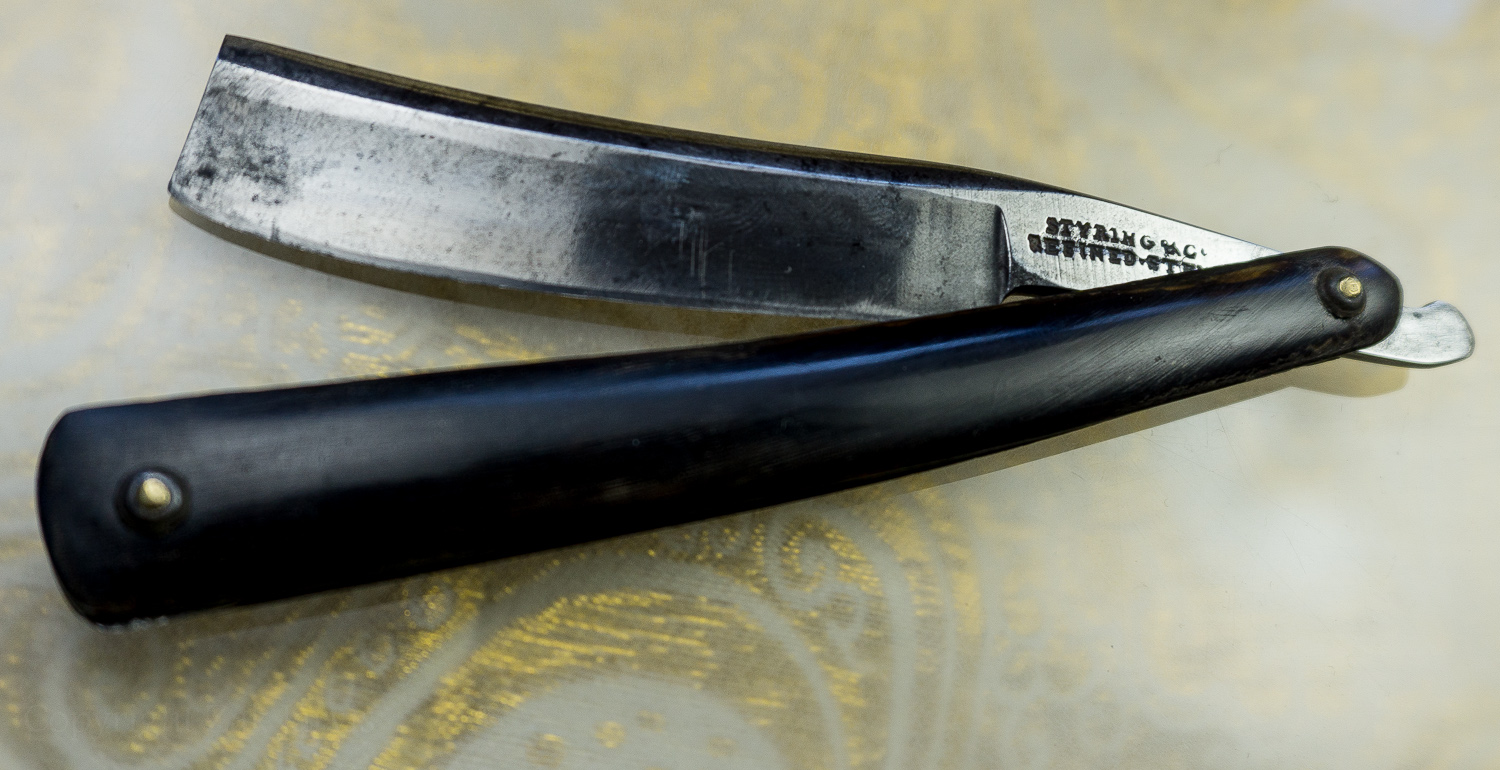 The firm “Styring & Co” was most likely the partnership of William Styring, Joseph Hadfield  and Joseph Harrison. That company was dissolved in 1811, and they became Styring & Hadfield, and continued producing cutlery (including razors) until 1827, when the two went their separate ways.

Hadfield continued making and selling cutlery, but Styring became a grocer. Styring died in 1831, aged 80, followed by Hadfield in 1836, age 87.

Joseph Hives makes the perfect example of the marginal Sheffield cutler. Born late in the 18th century, he and his younger brothers George and William were all apprenticed out by their father, John, who was variously described as a farmer, a yeoman, and a filesmith. It’s certainly possible they’re different men with the same name, but all were in Ecclesfield, and two of them were listed as residing at the Elm.

Joseph was apprenticed to Joseph Roberts (who counts as a recognizable name for razor makers from the period), who worked out of Garden Street when he was listed in Gales & Martin’s 1787 directory (and was not listed in the 1775 edition, at least not as a razorsmith). He was freed in 1803, and his brothers weren’t far behind.

Most likely this razor was made early in his career. How long did his career last?

He had three apprentices (and his brothers had none). None of his apprentices finished their turn, and the last was taken in 1806.

Joseph Hives is designated as a razor manufacturer in all three listings for his apprentices, but I can find no directory listings for him. Most likely, his business was rolled up by 1811 when Holden’s London & Country directory was printed, and definitely by 1822 when Baines Directory & Gazetteer of Yorkshire was published.

No doubt there were many cutlers who fall into that gap of published directories.

I cannot find any other records about him or his brothers. 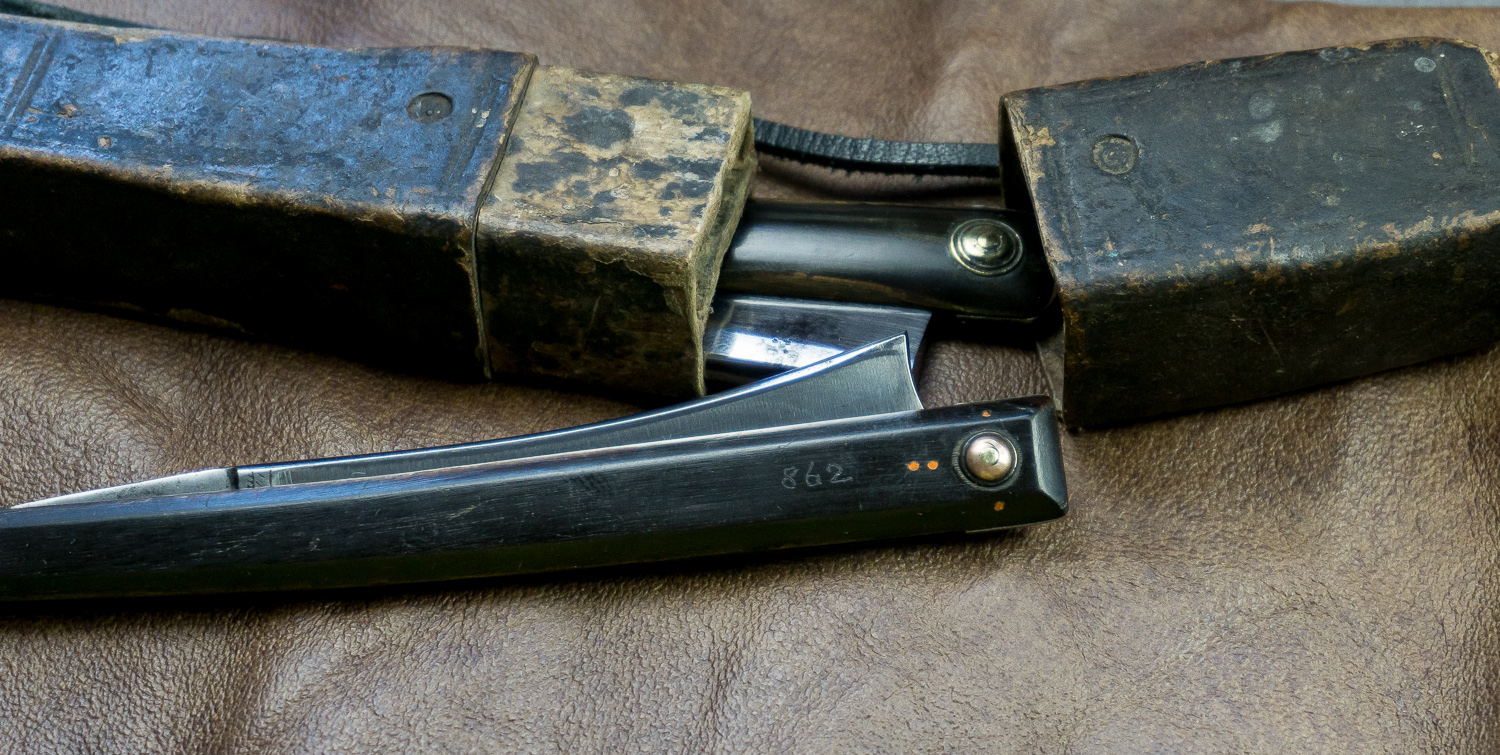 Also noteworthy about this particular razor, it appears to have belonged to the prolific collector and fellow amateur historian, Henry T. Lummus (1876-1960) — a Massachusetts Supreme Court judge and author of two well-known articles about collecting straight razors ((He was also the author of much else, but for the purpose of razor history, he only wrote two pieces for Antiques magazine, in the early 1920’s)) . He had a system of dots and numbers that he marked on the pile (reverse) side of his razors. Many, many of these are circulating in the collector community. So many that it’s not entirely clear if they were all his, if he shared his system, or if some were counterfeited. To the best of my knowledge no one knows what the markings designate. 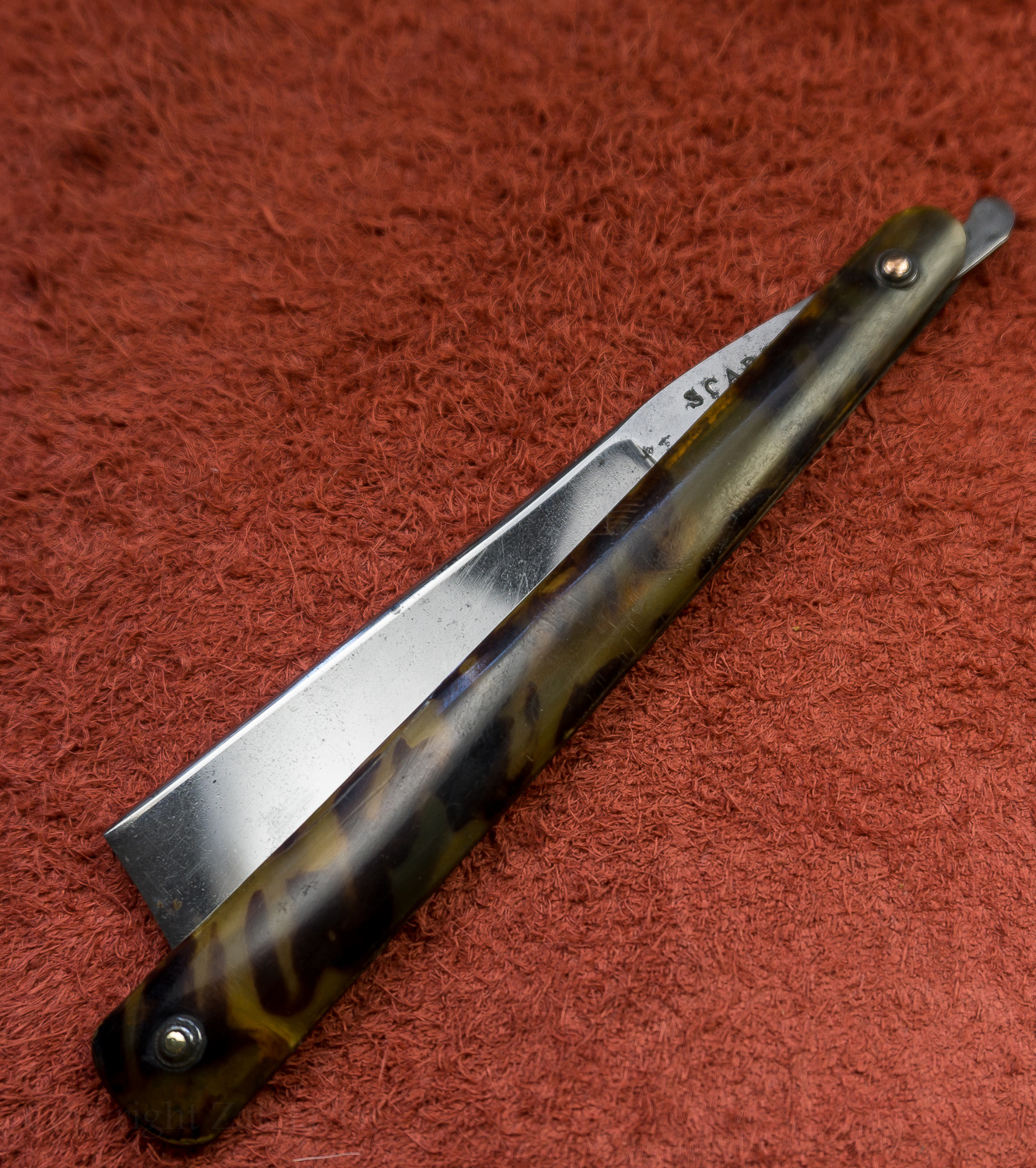 Thomas Scargill followed very much in the much more famous footsteps of John Barber, even regularly appearing in the same newspaper ads through America in the early 1820’s. 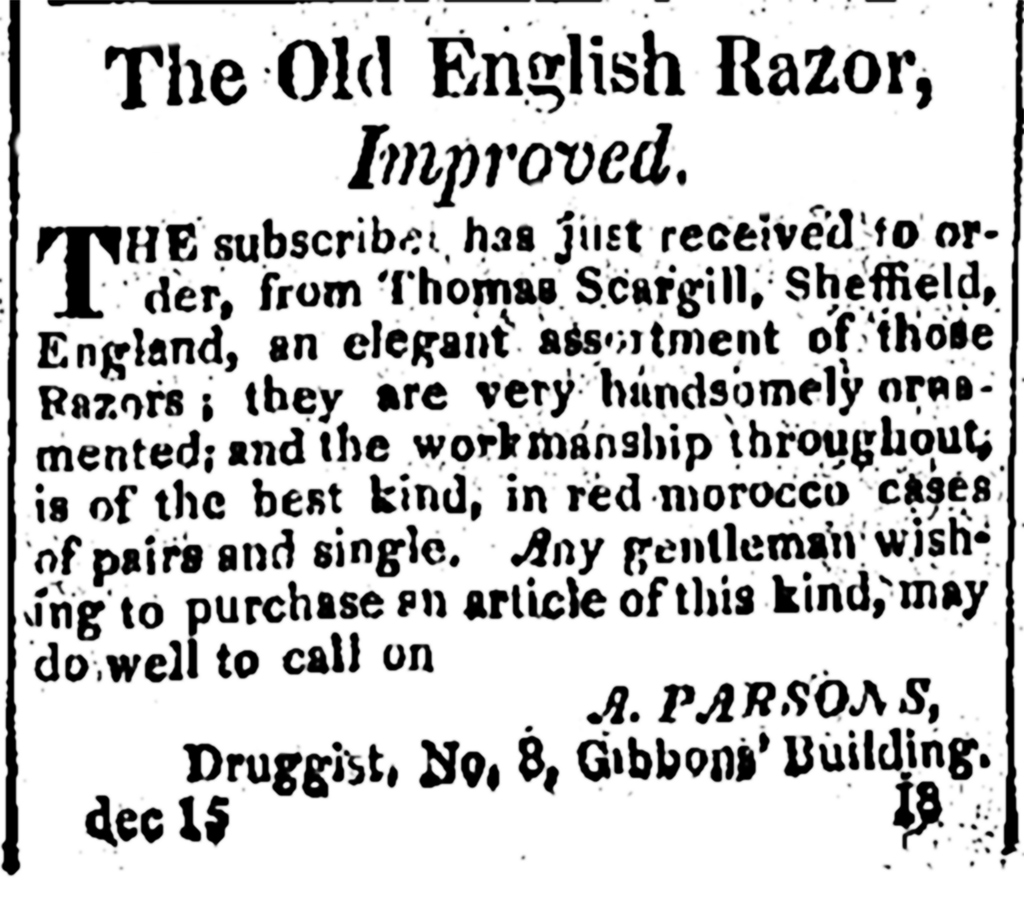 He’d been born in Sheffield around 1785 to a joiner, also named Thomas. Young Thomas was apprenticed to the somewhat famous George Johnson in 1795, after his father died, and completed his apprenticeship in 1813. Just in time for the Cutler’s Company to lose monopoly power over apprenticeships. He took a single apprentice in the year he was freed. 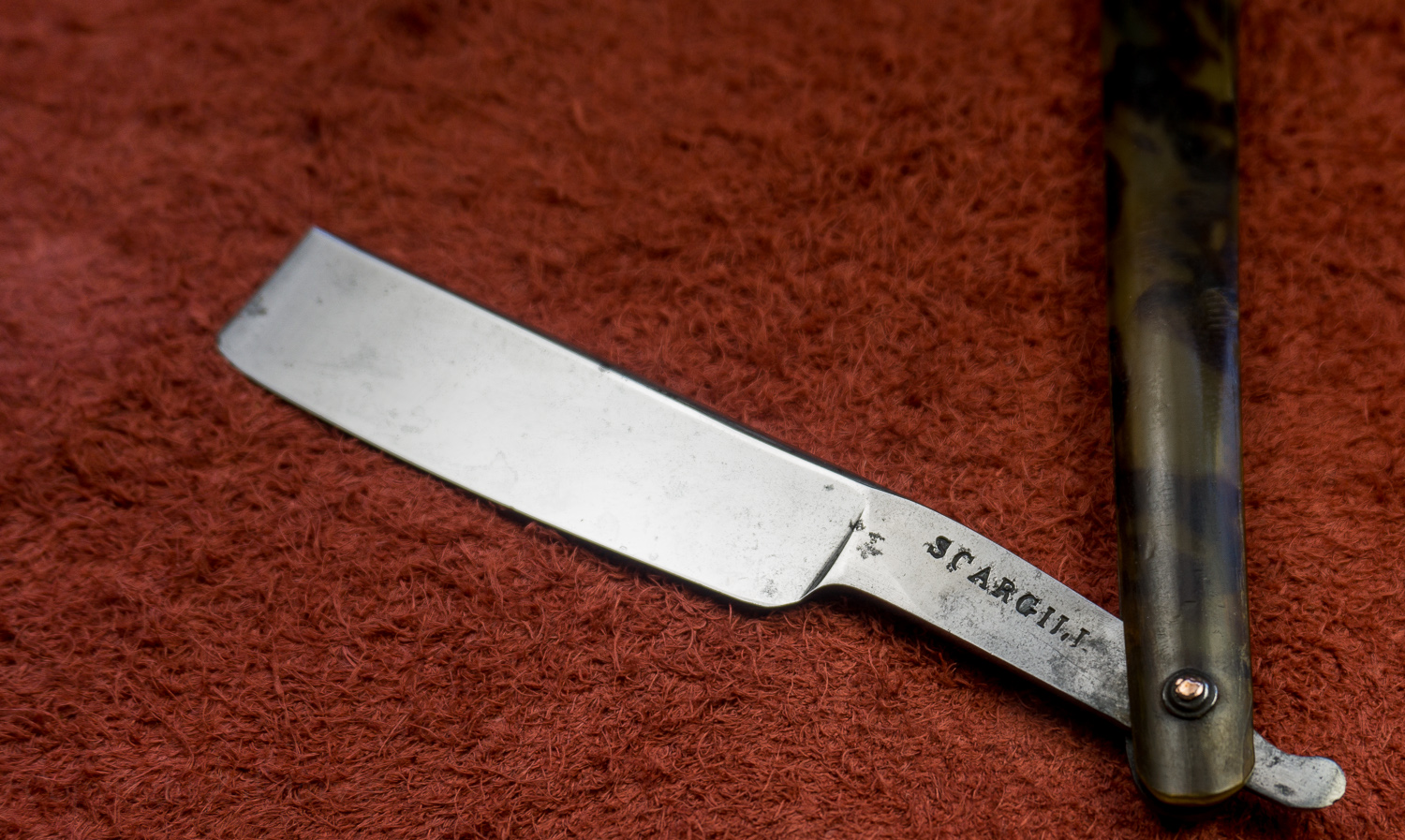 Many of his razors survive, though. Surely in part because he heavily prioritized the American market, but also because he cannily marketed himself directly on the coat tails of John Barber, arguing that his razors were just as good, if not as fancy, and a good deal cheaper. Later models were stamped T. Scargill.

This razor most likely dates to 1813-1820; it was a very common style. They made surprisingly good fake tortoiseshell scales back then.