With 19th century Sheffield razors the most succinct answer is deeply unsatisfying: we simply don't know.

Before the turn of the 19th century and for maybe the first decade thereof, a manufacturer’s stamp had some chance of being the name or mark of the person who made the razor, or who chiefly assembled it. As the Sheffield cutlery trade began to seriously grow in the mid-18th century, the workshops expanded tremendously. With bigger workshops came more workers and a greater division of labor. Though, it is worth noting that grinders were considered their own trade skill as early 1750. Through the 19th century the trades involved in razor production were forgers, grinders, pressers, and hafters.

•Forgers took the raw steel, typically refined by another firm in Sheffield (("Razor steel, on the other hand, which has to take the keenest edge of any cutting instrument, and is consequently hard and brittle, must possess also an absolute uniformity of temper, and be susceptible of a high polish. Such a steel is produced by the crucible melting process... The material for these finer qualities is derived almost exclusively from imported iron, the best known being obtained from Sweden and converted into steel in Sheffield by the process of "cementation." This Swedish iron is a metal of singular purity which has lost most of its carbon in the operations of puddling and rolling into bars, by which it has been prepared for export." -- from Godfrey Isaac Howard Lloyd's The Cutlery Trades.)) , and shaped it into a rough form using heat and a hammer. For some types of razor work, two hands were required and the forger had to hire a striker to work the hammer. The forgers made the 'nail hole' or pivot as well as impressing any stamps that went into the steel.

•Grinders had the most dangerous job. Most razor production had to be done 'dry', meaning the many different sized wheels they used to shape the blades ran dry (other parts of the cutlery trade used wheels that could be wetted or even run with sufficient water in the trough -- or trow as they called it -- to keep it constantly wet). A dry grinding wheel throws lots of sparks and dust, and the wheels were used up so quickly that there would be one or two replaced per-day. Wheels were delivered directly from the quarry and had to be 'hacked' and 'raced'. This meant a hole was drilled in the center for the axle, then it was spun at low speed while a steel tool 'raced' the surface until it was smooth. This process took upwards of half an hour during which the entire hull ((Buildings that housed the grinders were called wheels, the individual rooms were hulls.)) would be coated in dust. Grinding comprised multiple different steps of production beginning with shaping, moving on to glazing, then lapping and finally polishing.

It cost money to be a grinder, from paying rent on the trow, to powering the wheel. Even the cost of the gaslight came from the grinder's pocket. Each trow held three wheels so for tasks that required more than three workers, more rent had to be paid. Typically they were expected to bring their own tools, wheels and horsing ((The seat positioned over the trough which the grinder sat on to do work.)) . If tools were provided, their rent was increased. The rent on the space was due regardless of whether or not the grinder had work available. For production of razors, three or four separate grinders were required. The grinder with the stone wheel sits nearest the window, he shapes the blade. Behind him is the glazer who uses a wooden wheel wrapped in leather and coated in a mixture of glue and emery. Depending on the finish of the razor, there will be another worker using a lap, which is a lead-wrapped wheel. If the razor is to have a fine polish, then there will be a polisher at the very back. Boys and some girls aged 5 to 12 worked the polishing wheel, which turns much more slowly. It was a smaller wooden wheel coated in crocus -- a very fine grade of iron oxide made on premises.

•Pressers were responsible for production of scales, especially those made of horn or tortoise shell, though ivory could also be softened and pressed in a mold. Horn scales were most common and could be made from either cow horn or Asian water buffalo, depending on the era and availability. Horn could be dyed or bleached depending on the characteristics of the raw material. Most was dyed black or bleached transparent and then dyed to mimic tortoiseshell (which is actually made from sea turtles and is not tortoise at all). Pressers were often employed by larger firms, but sometimes were their own entirely separate business. Scales came in many different forms from the plainest black to ornately shaped with figures and slogans, to ivory and bone decorated with pique work. Fancier goods were done up in mother of pearl or silver.

•Hafters took all the individual parts and assembled them into working goods. They used lead sheets and latten ((a type of brass hammered very thin)) to punch out a variety of types of washers used in the assembly of razors. The latten was placed on a sheet of lead and a special, shaped punch ((called a double-o due to the shape which had a circle within a circle)) was driven through the brass with a hammer strike.

William Greaves & Sons were the first to open a factory that contained all the branches, including steel production. The Sheaf Works opened in 1823. 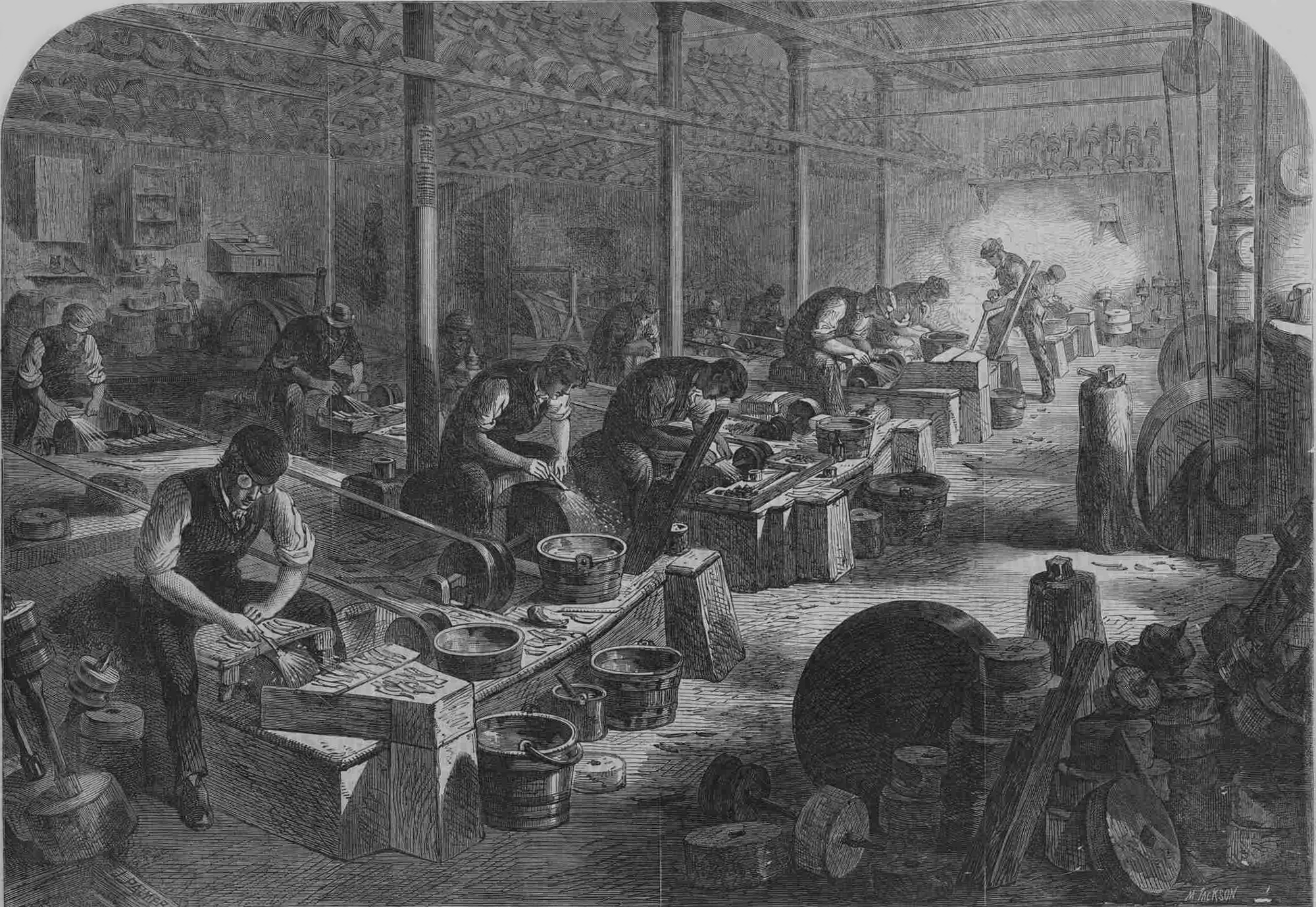 A typical Sheffield workshop, showing razors being ground on a variety of stones. Image from the January 20th, 1865 edition of the Illustrated London News.

Any or all of these types of workmen could be hired by a firm either as permanent workers or as 'out-workers' -- think freelancer and you'll be in the right area. Any of those tradesmen could technically be called little masters (or in Sheffield parlance, little mesters). Most commonly though the little mester was a kind of middleman who hired teams of workers from the trades and often rented space in hulls of large firms. The little mesters sprouted like mushrooms in times when there wasn't enough work to go around, and when they did they undercut the major manufacturers.

We tend to imagine factories turning out stockpiles of goods that are stored in a warehouse then sold. The system then, however, was much more hand-to-mouth. Goods were made as orders came in. Manufacturing firms had salesmen who traveled around the world to collect orders from shops of all sorts (bookstores and stationers sold razors through much of the first half of the 19th century, because quills were the most popular writing implement and you needed a pen-knife to use them and pen knives and razors were often made by the same manufacturers). The orders went back to the factories and the factories put them before the workers, or hired on extra hands if they were especially busy.

Because the grinders paid rent on their troughs, both they and their employers had an incentive to keep working even when the factory owner didn't have work to be done. As such, it was common for goods to be made for a rival firm (("Employers naturally wish to attract the best and steadiest workmen as in-workers; hence, as a rule, the conditions as to the deductions and supply of work are more favourable within the factory gates than outside. Not only is the employer virtually compelled to find work for his in-workers if they cannot otherwise secure it, but he also naturally dislikes seeing a rival manufacturer's work brought on to his premises for execution, though this the in-worker has, of course, a right to do if he is paying rent and is not supplied with work." -- from Godfrey Isaac Howard Lloyd's The Cutlery Trades.)) .

Making the work situation worse, especially for out-workers, employers up until the 1850's had the right to pay whatever portion of the wage they wished in truck ((The trucking or stuffing system of payment saw employers paying workmen either partly or wholly in goods.
"The factors and the stuffing system continued, notwithstanding, to flourish. The evil went on and was especially rampant, in its hoary vigour, in the first half of the nineteenth century. This 'Stuffing" had, in fact, been developed into an institution which, in spite of the gross iniquities possible under it, was not without its defenders. Under it every workman was expected to take part of his wages in goods -- cheese, tea, linen, and woollen cloth, and other articles. For this the master gave him a note of credit -- not to a regular grocer or draper, but to a factor, with whom he did business, who kept the goods for this traffic, and charged for them outrageous prices. By a repetition of this process the workman was fettered to his master by a constant debt; and the latter shared with the factor the profits of an enforced truck. It not unfrequently happened that a debt of £5, £10, or £20 was transferred with a desirable workman from one master to another." -- Robert Eadon Leader's History of the Company of Cutlers of Hallamshire, Volume I.)) . The effect of this was that workers often had two, three or more employers at any given time. This was especially true in lean times when work orders were thin on the ground.

It’s this that makes it impossible to know “who made that?”. Razors with generic stamps like ‘Refined Steel’ or ‘Warranted’ were turned out to pay bills that work orders couldn't. Usually those generic razors are of the same quality as 'branded' razors. 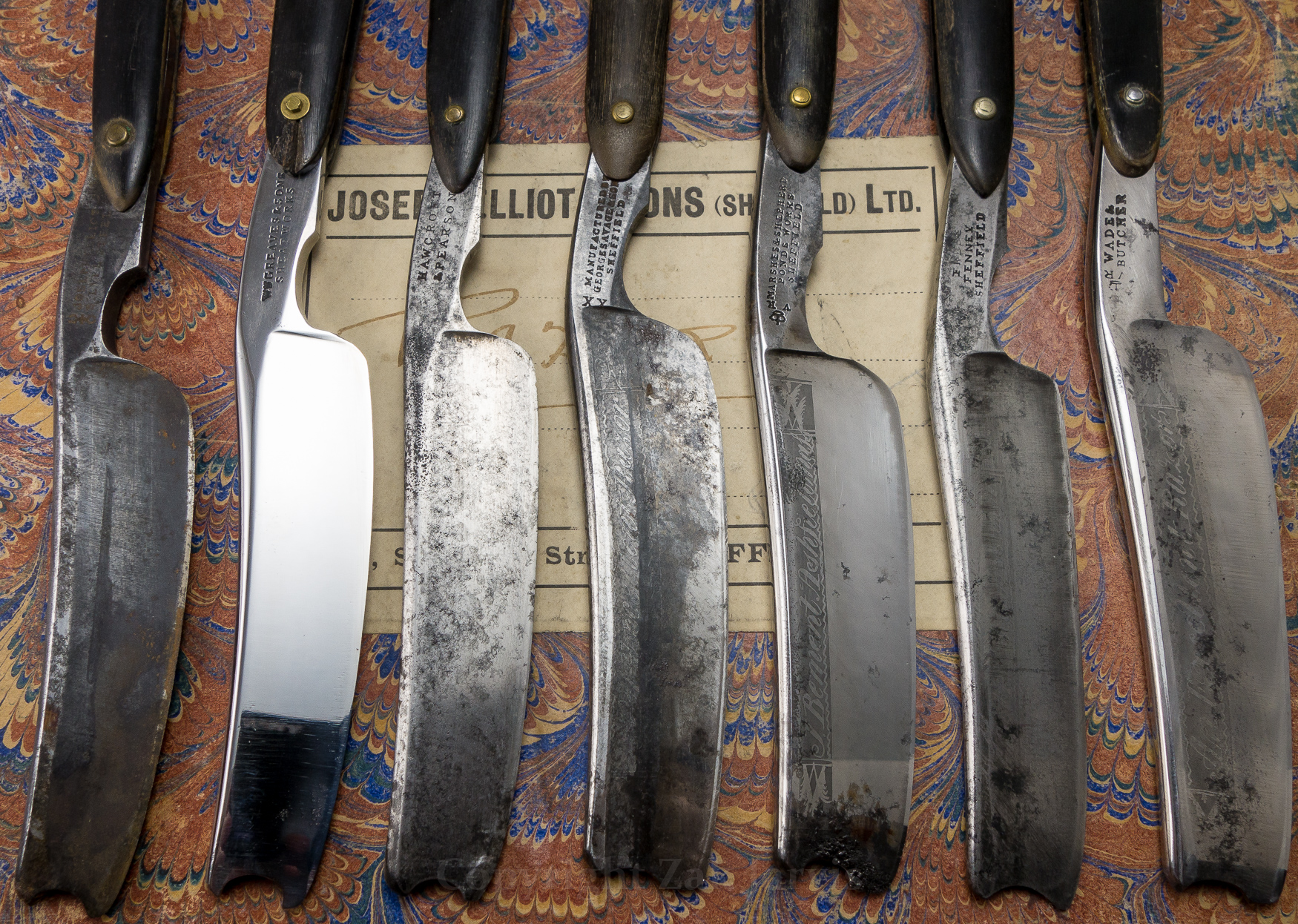 Seven razors in the same style from the same time, all marked with the names of different firms. All but the Marshes & Shepherd had the "An Excellent Razor" blade etch, it is is etched with the name of the American retailer, Jasper Bement. I have a second specimen of that same style Marshes & Shepherd with the "An Excellent Razor" etch, but it is sufficiently worn to change the shape of the blade. All that have crown marks are identified as Victorian.

More likely than not, many of these were made by the same hands. The Fenney and Wade & Butcher are fairly stylistically different from the others, but there are subtle differences even between those that are more similar.

The tapered razor etched with 'An Excellent Razor' was a style very popular for about five years, beginning in 1837 (at the very end of William's reign). The style vanished very quickly, raising many questions about it's meteoric path.

Did it fall out of popularity because of fashion? That same range of years was an incredibly turbulent time for the Sheffield cutlery trade, during which there was an explosion of independent little masters. Were these excellent razors produced by the independents and associated with poor quality goods? All that I've shaved with have been superb. Or did the style fall out of fashion because so many workers were turned out and didn't have access to the tooling and equipment required to make the specialized shapes? Grinding wheels were often modified for particular shapes.

The workers said they could identify the work of individual tradesmen by characteristic elements of design or marks. That knowledge is all lost now, as are the names of most of the tradesmen and little mesters.

Their work lives on.